Chattering Teeth News - President Trump backs off on his threat to quarantine the city of New York, and instead just has Governor Cuomo put into a border cage. 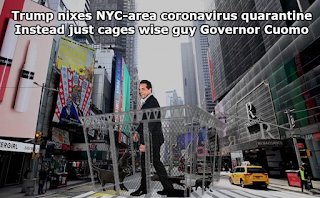 PICTURED: This is only concept art photo shopped by VP Pence during a coronavirus task force meeting after the boss blue skyed the idea. Thankfully, Cuomo is not really 3 stories tall or we'd have another "giant monkey loose in downtown NYC" to cover.  His cats, however, ARE reported to be as large as taxis.

“A quarantine will not be necessary,” Trump tweeted Saturday night.... But I didn't like Cuomo's mouth. He's a real dumb guy. A wise guy. So I thought he needed a little time out spent in one of those illegal immigrant cages Obama liked to use at the Mexican border. After Mexico built the wall because of the China virus, and paid for it by the way - just like I promised, these cages weren't being used.

Let me also say that there are plenty of cages for any unappreciative woman governors who are in way over their over-sized foreheads or cutie pie reporters, this I will tell you. 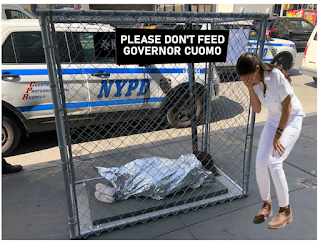 PICTURED: Governor Cuomo takes a nappy as AOC looks on. The combined intellect of these two democrat politicians tends to draw the pigeons, and consequently quite the mess is created on the sidewalk. Not by the pigeons, but by cortez feeding on them while sitting on the curb.
Posted by DaBlade at 7:18 AM