The White House physician has issued a new statement:
"A month and a half after giving the State of the Union speech - and with the Speaker of the House, Nancy Pelosi, sitting behind him in close proximity - the President remains symptom-free of from whatever the f&&k she suffers."

TRUMP: I took the test last night. People were asking, did I take the test? Listen, I haven't even been in the same room with that bat-shit crazy, old loon since the SOTU speech when she tore up a copy of my big, beautiful speech. I've been practicing what they call 'social distancing' from Pelosi. A very big phrase, 'social distancing'. But mumbling Nancy is clearly nuts, as is all of the so-called leaders on the democrat side, this I will tell you. Their candidate-apparent, Sleepy Joe, is obviously suffering from dementia. But people ask if I've met with Nancy on this thing or on that thing. People were asking, did I take the test? So I took the test.

The White House physician stated the obvious that the testing confirmed what the country has already known. President Trump tested positive for Awesomeness. 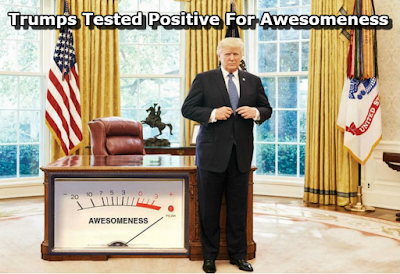