Michigan has the largest Arab community in the United States, and second only to Paris outside the Middle East. It is estimated there are approximately 350,000 people of Arab descent in southeast Michigan, including significant numbers of Iraqi, Lebanese, Yemeni, and Palestinian Americans. Keep this in mind while reading the following...

A group of Arab-American students who are members of the class of 2011 at Dearborn’s Edsel Ford High School told school officials they were showing pride in their class with their choice of sweatshirts on Monday.

But school officials disagreed, confiscating the sweatshirts and scheduling meetings with the students and their parents because the images on the sweatshirts referenced the Sept. 11 attacks on the World Trade Center Towers.

Along with the words, “You can’t bring us down,” the sweatshirts featured an image of the number 11 as the twin towers with windows included on each digit. The school’s mascot, a thunderbird, was flying nearby. 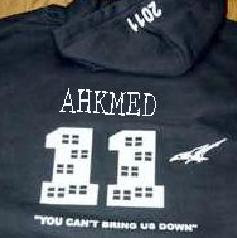 DISCLAIMER: The original photo of this sweatshirt had the student's name blurred out, but Chattering Teeth experts were able to bring it back using graphic enhancement techniques.

Well, at least their school mascot is something benign like a thunderbird and not a severed infidel head. Of course, the thunderbird doesn't look so benign as it looks like a plane heading for the Twin Towers.

I guess it's just innocent school spirit these Arab youths exhibited by using the imagery of the horror that was 9/11, and the almost 3,000 innocent deaths.

Maybe we should congratulate them for going to school at all in the Detroit area, which has a stellar graduation rate of 25%. These sweatshirts would be a little warm for the desert, which is where I would deposit them. Of course, it's more likely one of them will be our president in about 25 years (if we are still around).

Video
"Why in the world would any teenager think printing up a sweatshirt that appears to glorify terrorism is appropriate?"
Posted by DaBlade at 6:38 AM