I agree. Obama Should Not Skip Out on Jury Duty. 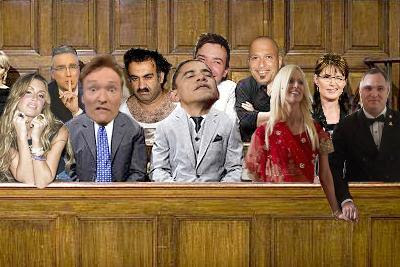 The more time he spent in a jury box, the less time he would have to spend us into bankruptcy.

Plus, this could be comedy gold. Who knows? We could get pictures from the paparazzi of Obama bowing to cuffed defendants in orange prison garb. Or maybe at some point during cross examination of a witness, Obama would vault from his chair and holler, "I CAN'T HANDLE THE TRUTH!"

*Sigh* Not to be. Maybe he was told his teleprompter would not be allowed to accompany him during deliberations. From his perspective, why waste time sitting in judgement of one individual when he can spend his time in judgement of, and hold the entire country in contempt.
Posted by DaBlade at 8:05 AM