Flint homicide count at 62. A new record, beating the total of 61 murders set in 1986 and justifying it's "lofty" 4th position on the 2010 list of Most Dangerous Cities, per the CQ Press.

How sad, but so utterly predictable. This is a direct result of the incremental rot that is liberalism and your democrat party at work. Their systematic and purposeful destruction of the American family for the purpose of supplanting it has led to this hopelessness and chaos in the streets. The "Progressive" movement has been most destructive to the African-American population, as evidenced by this murder rate. Rare is the occasion here where a child is born into a family consisting of a mother and father who are actually married, and who all regularly attend weekly church service to give thanks to God.

Michelle Obama: Oh come now DaBlade! ‘We Can’t Just Leave It Up To The Parents’

Flint, Michigan - The birthplace of General Motors, the UAW and yours truly. Thankfully, I was born into a family consisting of a married mother and father and we went to church. It used to be the norm, not the exception around these parts. Let me ask you a serious question... When is the last time the mother of a "New Year's Baby" in Flint even knew who the father was? Oh well, does the "winner" still get a $50 savings bond? Can't get much crack for that.

PICTURED: My dad arresting my brother Donnie for not cleaning his room, or something. 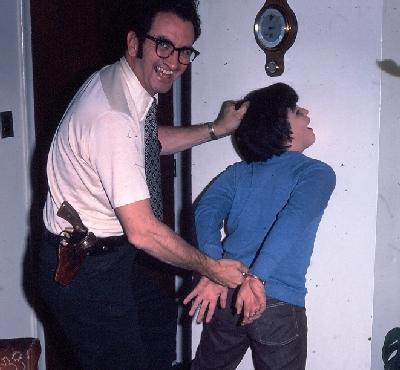 My father was a police officer, then a homicide detective for the City of Flint during my formative years in the 60s and 70s. Back then, the annual murder tallies probably averaged between 40 and 50 something - back when the city had almost double the population. I remember my dad saying he was thankful he never had to shoot anyone, though he had numerous dangerous close calls. He was never shot either, though once when he was working a second job as a late night under-cover detective at a JC Penny, he was stabbed in the hand by a woman attempting to shoplift an expensive winter coat.

I can't recall all of my father's exciting cop stories, but I cherish the one's I do. I remember waking up in my bunk bed to a ringing phone in the middle of the night and my dad pulling out of the driveway a short time later, as he headed to the freshest murder scene. I remember the department issued 38 caliber revolver sticking out of it's holster under my dad's sports jacket when he got home from work. I remember that he loved the "Dirty Harry" movies and TV's Columbo, but despised Cagney and Lacey.

PICTURED: Thats me in the front between my mom and my sister. My dad took this picture of us at Bishop airport, right before he hopped a plane to somewhere for a prisoner escort. 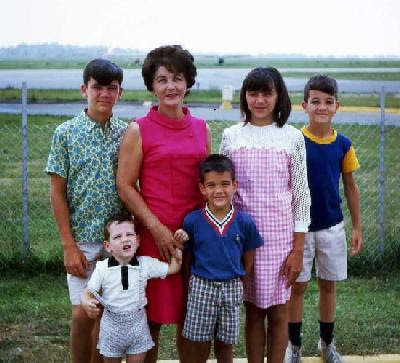 I remember crying on the way home after watching the plane disappear into the clouds and me thinking I would never see him again. He died shortly after my baby brother Donnie was killed by a drunk driver in 1988. My mother is with them, having died just a few years ago. I think of them often and remember fondly the Christmases of long, long ago.
Posted by DaBlade at 8:54 AM