Last one out please unplug the frayed, duct-taped extension cord

I've been back in Michigan since late October and I still get an occasional, "Hey, aren't you working in Minnesota or Wisconsin or somewhere?" When I tell them I am back permanently and they ask, "why?" - here is what I tell them.

Think of the "Remember when the Germans bombed Pearl Harbor" scene from Animal House. You know the very end where Bluto says, "who's with me? Let's go! C'mon... AHHHH!" and runs out the door solo?

Speaking of population shifts - According to this AP story:
"(the 2010 census) found the nation's population growing more slowly than in past decades but still shifting to the South and West."

The big winner is Texas, which gets 4 new US House seats While Michigan gets it's very own map color. 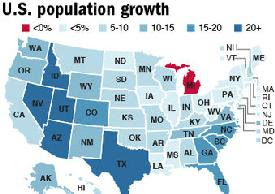 Look at the bright side. A lost, red Mitten is easier to find in the snow than a light blue one. I am not exactly sure what I mean by this, but if you scratch your chin and contemplate this metafornalogy thingy's deeper meaning, I'm sure you will find it brilliant.

Hmmm... let's see if I have this straight. If more seats are in fact a good thing... and the number of seats are tied to the population... and the population growth in Texas is related to a "surge of Hispanic residents"... then Michigan just needs to figure out how to attract a surge of Canadians by the next census.

Maybe leave out a case of Red Cap Ale or fry up some back-bacon? That always seemed to attract a protracted visit from my mom's cousin Bill, eh? OK, so some things just aren't worth the price. 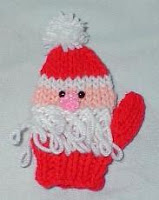 So why is Michigan the only state to have lost population (54,000 residents over the past decade), and is that necessarily a bad thing?
First, I'm not sure that I readily accept the premise that Michigan's population balloon is deflating. How accurate are these census numbers after all? It is tough enough for the government to gain the cooperation of law-abiding citizens in these counts (*snicker*) let alone getting an accurate count of your typical islamofacist terrorist or serial killer. They are usual ducking during the head count.

"'Blade, wouldn't this be true wherever they live?"

Sure, but are you presuming an even distribution of al qaeda operatives? I would contend there are more of them here because, hey - where better to blend in?

Then again, I'm seeing a bright side here. Fewer people means more vacant homes. The more vacant homes there are, the more opportunities for me to illegally draw electricity through my frayed, duct-taped extension cord hooked up to an outdoor outlet on the garage of the vacant house next door so that I may power up my life-saving Christmas lights... hypothetically.
Posted by DaBlade at 8:59 AM