Re: The CBS News/National Journal GOP debate on foreign policy. We live in a dangerous world and it is getting "dangerouser". We need a president who can effectively deal with the issues that threaten our national security. Namely...

* What to do about that Mahmoood Ackmadeenadude fella in Iran trying to build a nuclear weapon.

* What to do about Chinese currency manipulation,

* While all reasonable people agree that Attorney General Eric Holder should be water boarded for his treasonous role in the "Fast and Furious" gun-running scheme that led to the death of a border patrol agent, should water boarding be used in any other circumstances with other enemy combatants who possess information critical to our safety and security? Or do you hold Ron Paul's view that it was even immoral for the pioneers to torture their textiles using wash boards.

There is nothing more important than the answers to these, and other questions related to foreign policy. If you are looking for a detailed and substantive analysis on these issues, you may have taken a wrong turn on the information superhighway, as my focus will be about turtles.

I couldn't help but watch the debate through the prism of this recent comment made by Newt Gingrich:

“The bunny rabbit runs by and falls asleep,” he said recently. “The tortoise just keeps coming. So hopefully in this game, Mitt Romney will be the bunny rabbit and I’ll be the tortoise. That would all work out perfectly.” 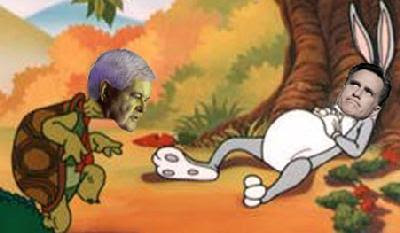 Newt's recent rising poll numbers certainly back up this comparison. He had another great debate last night, and I am sure this rising poll trend will continue.

“But enough about that. The question that nagged me more than any other of those foreign policy queries above was this (Best read in your head with the voice of barbara Walters): If the Wepubwicans were turtles, what kind of turtles would they be?

Newt Gingrich - Newt likens himself to the tortoise, but based on his snarling and attacking responses to some of the idiotic moderator questions, I'm going with the American Snapping Turtle. Characterized by a massive head and strong jaw, watch your fingers if you get too close! That goes for these turtles too. The Snapper is my personal favorite. Turtle AND candidate. Go Newt!

Mitt Romney - A Red eared slider. They are one of the most common pet turtles. Some pet owners have been know to use a non-toxic paint on the back of their shells to distinguish one from the other. Different colors can project a different pseudo-personality, and the colors can be changed for convenience.

Rick Perry - Box Turtle. A box turtle lives most of its long life in a small parcel of land near its place of birth. This area is known as its home range. Perry will be returning to Texas soon.

Ron Paul - The Eastern Spiny Softshell Turtle. Why use up valuable energy on hardening that exo-skeleton for protection when we are just going to spend our time on sandy or muddy bottoms eating snails?

Jon Huntsman - Pick any Asian turtle species, since Huntsman was the Chinese ambassador for a time. Get it? Same language and vacant stare. These breeds also have soft shells and the Chinese are eating them into extinction. The turtle, that is.

Michele Bachmann - Diamondback terrapin. OK, it's a stretch, but diamonds ARE a girl's BFF, right? Besides, these terrapin nests have been known to produce as many as 23 hatchlings!

Rick Santorum - Loggerhead. No reason, other than I have always wanted an excuse to say "Loggerhead" on this blog. Aside from that, The top shell (carapace) is slightly heart-shaped and reddish-brown. In the right light, so is Santorum's doo.

Herman Cain - Green sea turtle. "Green" as in the only non-politician in the field. That is not necessarily a bad thing. I love Herman. I love pizza. Green turtles inhabit shallow lagoons, feeding mostly on various species of seagrasses (which is not a recommended pizza topping).