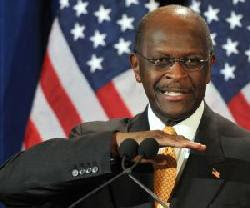 PICTURED: Serial female height comparer, Herman Cain, caught in the act yet again demoralizing a democrat operative poor and unsuspecting female, and creating a hostile work environment. Just how many stature abused women are out there thinking, "I don't want to relive being told I was the same height as his wife!"

PICTURED: Texas Governor Rick Perry tells Chattering Teeth that there have been three women so far that have claimed to be the same height as Herman Cain's wife, Gloria. "Three weeks ago Sharon Bialek became the first height accuser... Most recently, a gal by the name of Ginger White from Atlanta has come forward with assertions that, off and on for the last 13 years, she has occasionally been as tall as Gloria. That other gal in the middle... What's her name? I can't think of the third one. I can't. Sorry. Oops!

Perry then took a shot at arch rival Mitt Romney:
"And Mitt, you lose all of your standing from my perspective because you hired illegals in your home, and you knew that at least one of the females was of the approximate height as your wife."

Romney: "I told my staff that I'm running for office, for Pete's sake. I know I'm Mormon and all, but I can't have illegals working for us who stand as tall as Ann."

Meanwhile, Evangelical Christian Richard Land posted an open letter to Newt Gingrich demanding he explain what his problem was with the height of his first two wives. "He owes all woman of similar height an apology." 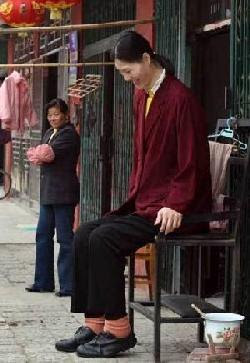 PICTURED: Yao Defen from China stands at 7'9" and is the tallest living woman, as recognized by Guinness World Records. Investigative reporters here at the plush Chattering Teeth news room have made numerous calls to Yao regarding allegations that she may be the next woman to come out of her over-sized closet and claim she is the same height as Herman Cain's wife, Gloria. So far, she is unwilling to come forward. I smell a "payoff" mister Cain! What did this "negotiated settlement" cost you in Renminbi sir!? 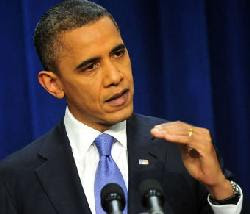 PICTURED: President Obama addresses reporters at a WH press conference, stating that he has not once compared the height of another woman's tush to that of his wife Michelle's. "For the record though, that bad boy comes up to about here," he stated.
Posted by DaBlade at 10:12 AM