Lots of statistics being thrown around today, but do they tell the whole story?

For example, we learn that 20% of cell calls to 911 are "butt dials", but did you know that 99% of those originated from Barney Franks basement?

ANON PAGEBOY: "Yes, I'm in Barney Frank's basement and I need a Gastroenterologist and the jaws of life, STAT!"

Of course, the most anticipated statistic today was the jobs number. The government is reporting that the unemployment rate slid to 8.6 percent in November. Of course, this number works like a golf handicap for the mainstream media, so we will just round that puppy down to an even 8%, whaddya say?

I can hardly contain my giddiness when I read that:
"...the "real" unemployment rate, which counts discouraged workers, also took a steep fall to 15.6 percent from 16.2 percent."

This number has no effect on the unofficial unemployment rate here at the rapidly deteriorating Chattering Teeth office, which by last check still stands at 100%. I say "unofficial" because, since I don't collect any UE benefits, I don't count.

Rejoice! The additional 278,000 Americans added to the unemployment figure is offset by the 315,000 who simply quit trying. Sounds like a reason to party to me! Obama's class warfare and several $Trillion in deficit spending seems to be working! How about another 4 more years to finish us off!

Men's Health measured suicide and unemployment rates, as well as antidepressant usage to calculate the happiest and saddest cities in America 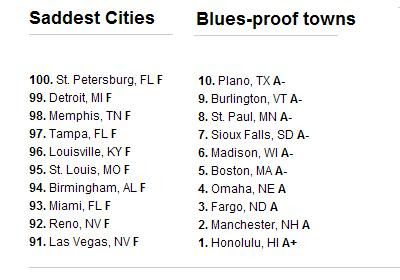 A little shocked to see Detroit lose out to St. Petes, this year's number one saddest city. We here in Flint, MI look to Detroit as our rich big brother and am wondering why we Flintoids didn't make the list. Maybe it's because the good folks at Men's Health are measuring antidepressants and not crack use. Or maybe Michael Moore's net worth from the lofty peaks of the 1% have skewed these numbers.

Ah well, gotta go. My crack pipe is calling me.
Posted by DaBlade at 9:34 AM