OK blog class, take out a clean piece of paper, a protractor and a sharpened pencil for today's entry - because admittedly, it is a little hard to follow. However, you may trust this content, for I have stayed up all night and currently have pictures on my wall of today's players - each with various relationships and connections to the others which I have illustrated by strings I have criss-crossed and stapled to the wall. Lets begin.

Like you, I had always assumed that comedian Andy Kaufman faked his own death in 1984 and is actually alive and well, and the current president of Syria. 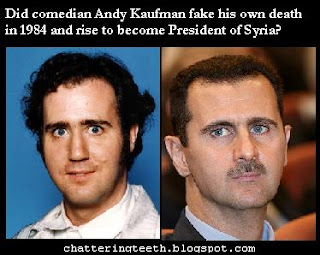 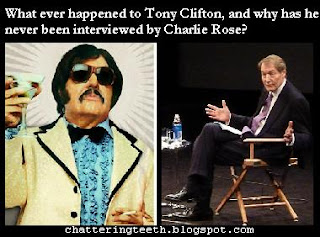 Stay with me here and prepare for your mind to be blown.

Some skepticals claim that Tony Clifton was actually Andy Kaufman in costume just doing another one of his strange bits. Maybe these are the same deniers who insist that professional wrestling is real. All I know is that Tony Clifton retired about the same time it is claimed that Andy Kaufman died, and is rarely seen in public any more.

Now ask yourself this... Why has Charlie Rose never interviewed Tony Clifton? I'll tell you why! It is for the same reason you never see comedian Dana Carvey sing a duet with Reba McEntire. They are the same person! 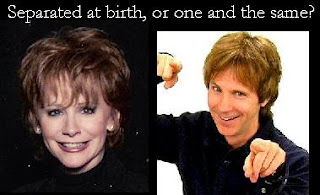 Dana - Reba - Dana - Reba. Seriously? Try harder next time fella. Or gal. (I guess I'm not even sure if Dana Reba is a very funny female singer or a male comedian with an excellent voice).

Regardless, my point has been made.

So I'm flipping through the channels this past Sunday and I stumble upon this paradox. Charlie Rose (Tony Clifton in retirement) interviewing Syrian President Bashar Assad (Andy Kaufman in hiding).

In conclusion, I believe I have proven two points. 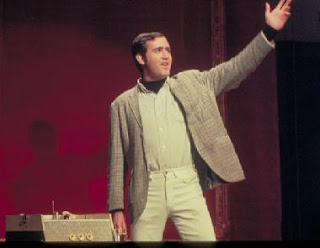 Number two: The United States would be in much safer hands with Tony Clifton as our president rather than that vulgar, washed-up, often-high ex-community organizer.
Posted by DaBlade at 7:42 AM