Chattering Teeth News - There was a suicide attack at an Iranian mausoleum, and the no-talent red-haired comedian Kathy Griffin has taken responsibility. Reports are sketchy (I only read the headlines), but by most accounts the shriveled corpse of Ayatollah Ruhollah Khomeini is still dead. The Chattering Teeth Bunker, Bar & Target Range will be handing out sweets to the children all day today while supplies last. 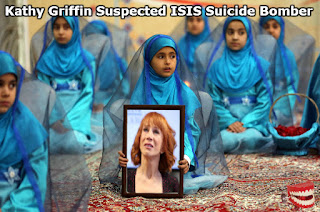 Hat tip to the Sunni jihadi who hated Shia Iran so much that he detonated his suicide belt at Khomeini’s tomb. That's some hate dedication! Reminds me of an oldie but goodie.

Q: Why do they put fences and armed guards around Iranian cemeteries?
A: Because suicide bombers are dying to get in.

Apparently, the suicide bomber also took out a security guard and a gardener who weren't yet dead. This could be devastating to the Iranian progress toward ability to check that the tomb doors are locked periodically, and for regular watering of the flowers to keep them from reverting back to sand boxes.