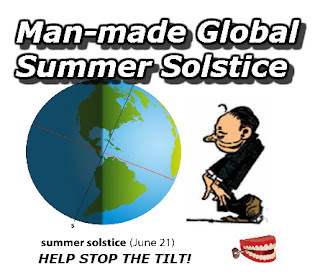 Today is the summer solstice, the unofficial first day of summer and the longest day of the year. I don't know about you, but I plan on spending my extra sunlight researching ways to combat this celestial annual scourge, and how to punish and ostracize the Man-made Global Summer Solstice deniers.

"DaBlade, what is this summer soul sista of which you speak, and what does 'Itchi gitchi ya ya da da' even mean?"
Not 'soul sista', you marmalade maroon. Solstice! And it is when the face of the Earth experiences maximum incline toward the sun. More sun might sound just peachy at first blush, but somewhere in the arctic (where the sun will not set at all) sits a lone polar bear on a melting iceberg - AND HE FEELS DIFFERENTLY, I assure you!

You see, Rusty, Earth tilts on it's axis while orbiting around the sun like an Irishman teetering home after a long night of too many pints at the pub.

The Earth is drunk, indeed. The deniers would have you believe the Earth's wobble was caused by our planet colliding with some other massive object billions of years ago, back when it was still being formed. Now THAT is FAR-FETCHED! The Earth started wobbling in 2008 with election of Barack Obama.

"So how, then, does man cause this wobble?"

It is caused by fossil fuels.

Specifically, the wobble is caused by irregular placements of crude oil, coal and natural gas in the ground. The only solution to stop this tilt is by evening out the Earth's weight.

Exactly! By the redistribution of fossil fuels through capitalist incentives involving drilling, fracking, mining, etc., to refining facilities and then distributed to homes and cars and cities, we can even out the planet's weight and STOP THE TILT!

I have also noticed a side-effect of the tilt, coupled with the centrifugal force of the Earth's rotation. These unnatural forces have inordinately displaced democrats and liberals of every ilk to both coasts. I theorize this to be due to a liberal's weightless environment that is their vacuous and foundation less intellect. They are as powerless as helium balloons in a windstorm against these forces.

Therefore, I propose relocating all liberals to the absolute geographic center of the contiguous United States, which apparently is some corn field in northern Kansas. Only then can we protect them by enclosing them in the safety of a large circular wall until we can stop the Earth from tilting and spinning.

Once the Earth is cured of this vertigo-inducing tilt and is sufficiently tidal locked, we can relocate the liberals to the perpetual dark side of the planet. Maybe THEN the state of Michigan will not have to pay for this extra sunshine with 9 months of steel gray overcast skies.

But until then, you can find me reading my Kindle in my pool while floating on a raft constructed of foam noodles.