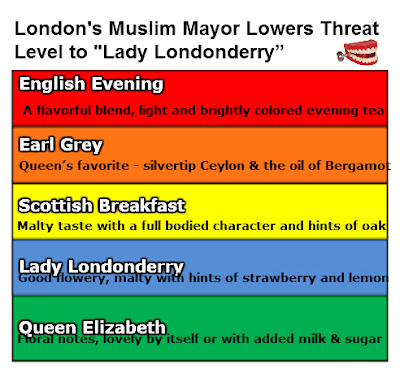 Today's Top Story around the water cooler at the Chattering Teeth Bunker, Bar, Spa & Target Range:
The London mayor, Sadiq Khan, (Peace be unto him) demands the British government issue a travel ban against Donald Trump for his mean tweets.

We may never know their motives.

First, I admit to not realizing London's “pathetic excuse” mayor was a muslim. What? Was he educated in his youth at an Indonesian Madrassa, I wonder?

I also had no idea the British threat Level scale used various British Teas to keep their unarmed citizenry sufficiently limp and languid. I had always assumed it was based on crumpets and scones, but no sense getting the works all stopped up.

As the Moozlim London mayor, Sadiq Khan (Peace be unto him), says... “no reason to be alarmed!”

People of Britainistan,
We here at Chattering Teeth are with you, and we pray for the victims and their families at the hands of those Islamo-goat fu*&ers. It is your apologist government we have issue with. Unlike France AND french people, we like you, the British people. You gave us The Beatles... Monty Python and Bennie Hill... probably some other stuff too.  We're cousins, after all. We got yer back.
Sincerely,
DaBlade


now for our seeing-impaired readers.