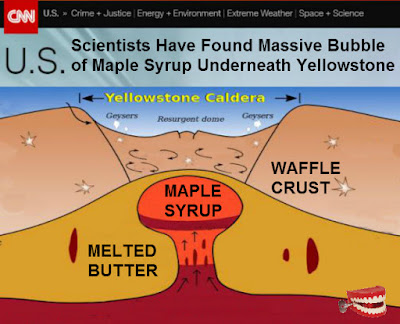 (CNN) - Unnamed and anonymous sources are telling CNN reporters that waffle batter, maple syrup and butter are likely underneath the Yellowstone volcano, and if it blows, it would cover the entire United States in deliciousness. The source of the hotspot is now thought to be a gigantic waffle iron.

The Yellowstone volcano has exploded in the past, and CNN scientist reporters now say that the high-fat breakfast waffles likely killed the dinosaurs from arteriosclerosis and heart disease.

NEXT WEEK: Large Donut Asteroid Hurtling Toward Planet
Posted by DaBlade at 8:00 AM