Bolton in a Box

Keith Koffler over at the White House Dossier asks an interesting, yet scary question:
Could Kim Jong-Un Kill Trump During Their Meeting?

I don't doubt our president's degree of macho, nor that Little Rocket Man would “go down fast and hard, crying all the way,” in a fair fight. But I also have no doubt that this this fat little inbred from NK would not fight fair.

He certainly hasn't when assasinating his own family members, whether it was a brother in an airport getting his face splashed with a nerve agent, or his firing squads using anti-aircraft guns, flamethrowers, and mortars against uncles and cousins who have pissed him off. Further, who knows what this pudgy despot could smuggle under his Mao dress, and whether he would agree to be searched. That said, Trump must take precautions and I have the perfect solution.

Think of this scenario. The leader of the free world, DJT, walks into the meeting carrying a huge box of donuts as a gift to Kim Jong-Un. This would certainly distract this squatty dictator and even disrupt any nefarious plans he may have had. 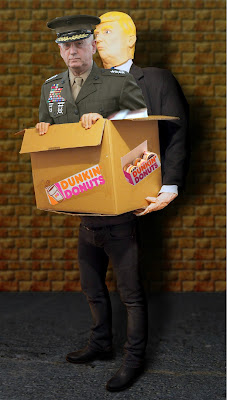 Even if a NK comfort woman managed to swipe a poison washcloth over the president's face, the SUPLIZE would be on Kim. For that isn't actual Trump, but a rubber masked mannequin look-a-like, and that box of donuts is none other than Secretary of Defense Jim 'Mad Dog' Mattis - who bursts out of the box and turns Kim into a huge pile of dog meat.

Or perhaps you'd prefer our new National Security Adviser, and a Bolton in a Box? 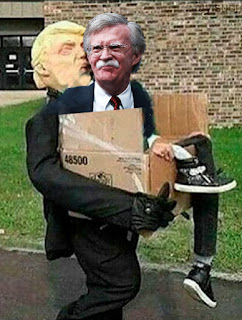 Then again, I can't see our president agreeing to either of these proxies, as unlike Kim Jong-un, Trump is no coward. If he insists on showing up in person to this meeting, perhaps he would at least agree to carrying Mattis or Bolton on his hip in one of those dog assault holsters (poorly executed photo shop not included). 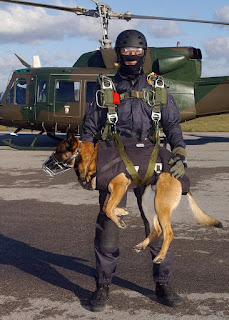 As per usual, I seek no profit nor recognition for this game-changing strategy. I simply offer this and all my services for the love of my country. That said, if you feel the need to contribute - please send one bottle of clean refreshing water to: