Nation struck down in road by self-driving Congress Omnibus

As for the headline, all I will say is that this $1.3 trillion omnibus shows the republicans have failed to protect this nation, and we will crash. Hard.

Now back to the uber...
Had I been driving down this dark road when this poor lady suddenly appeared in my headlights while walking her bicycle left-to-right across the road, I believe she would be alive today. Maybe there wouldn't have been time to break completely, but jerking the wheel to the right would likely have been enough to avoid hitting her. I know for a FACT that I wouldn't have been texting while driving, since I don't own a phone.

I'm not sure what the human back-up driver was doing, but the dash cam shows this individual gazing down and distracted by something. Their navel maybe? I don't know, but they never look at the road for the several seconds of the video. Nothing bothers me more than when I am watching a show on television and the scene involves a driver and passenger(s) talking while driving. The actors never seem to look at the road, and I yell out loud sometimes for them to, "WATCH WHERE YOU'RE GOING!" or "WATCH THE ROAD, YOU IDIOT!"  My wife will attest to that, as she calms me down by gently reminding me that the actors are not really driving the stationary fake car in front of a studio blue screen. And we miss the dialog from the scene completely, so I hope that wasn't important.

But can't blame the person. They had been conditioned to believe they were a passenger so they acted like it. I may not be the best passenger while my wife is driving, but I don't watch the road 100% of the time. Maybe 99.9%, and I constantly criticize and stomp on a non-existent brake on the passenger floor board. My wife loves it when I drive...

In conclusion, I will never trust a driver-less car. They may be safer than people. Logically I could be convinced of that, especially since I lost a brother to a drunk driver. However, I always drive defensively and assuming every other car on the road is manned by an idiot who is either drunk or texting or will otherwise do the wrong thing. Once the road is filled with (almost) flawless self-driving cars - we will let our guards down and gaze at our own navels. Once that happens, a smudge of dirt on the outside proximity camera may be our doom.

The only self driving cars I like are the old Matchbox and Hotwheels toy cars from my youth.

The Hot Wheels Court is now in session. 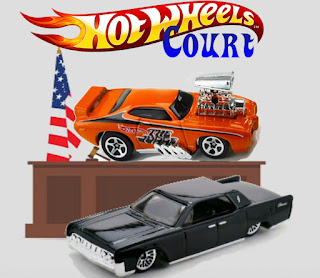 Despite a strong defense by the Lincoln Lawyer, the 1969 Pontiac GTO Judge threw the manual book at the autonomous Uber, and the Volvo XC90 SUV has been sentenced to drive the Green Mile.
Posted by DaBlade at 8:26 AM