And now its time for a Chattering Teeth sports minute... 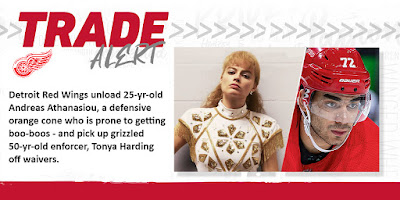 Detroit Red Wings trade Andreas Athanasiou at the NHL trade deadline and pick up 50-yr-old enforcer, Tonya Harding off waivers. While Tonya has never played professional hockey before, neither has AA - And the Wings needed to add a little muscle to take the heat off there flying Frenchman, Anthony Mantha.

While Mantha's willingness to throw down and stick up for his team mates is admirable, he always seems to break a hand or puncture a lung in every single simple dustup and then is out of commission on injured reserves for another 6 weeks.  By picking up Tonya, she can be the one to lay the club to the knees of any opponent who gets out of line.

ok, that Tonya part is fake news and just a case of wishful thinking. Other than that, it was a good day for Wings fans who have had little to celebrate this year. When a team is contending for a playoff spot, they are 'buyers' at the trade deadline. When they are rebuilding like the Wings - sell, sell, sell! They unload aged veterans or entitled youngsters on expiring contracts for future draft picks - sort of like using Kroger's clicklist when buying groceries - We'll just swing by in June in order to stock our 'fridge.

Andreas Athanasiou is a highlight reel speedster, so if AA works out for them - the Edmonton Oilers may become known as the "Edmonton Greecers". I hope so, but he needs to grow up first. He obviously had no desire to play actual defense with the Wings, and more often than not he appeared he is wearing oven mitts at the net and not able to finish his breakaways (but the cookies looked delish!). The Wings receive two second round draft picks in return, and this is twice as much as I expected Yzerman would get for him, due to AA's league-worst  plus/minus that is spinning down like a depth guage on a WWII submarine with a hole in its side.

The Red Wings also trade defenseman Mike Green to the Edmonton Oilers for forward Kyle Brodziak and a conditional draft pick in either 2020 or 2021. Green is at the end of a nice career and this move is definitely a win-win for both organizations.

This was Steve Yzerman's first trade deadline as the Red Wings GM, and I give him a grade of AA!
Posted by DaBlade at 7:19 AM