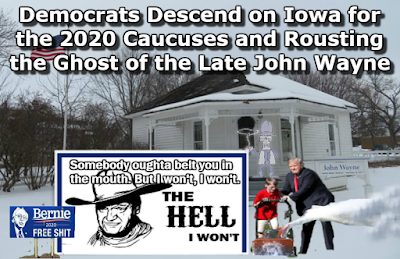 PICTURED - (background) The legendary actor John Wayne's first home in his birthplace of Winterset, Iowa. If you look closely, the Duke's ghost appears on the porch of his childhood homestead and he appears pissed. (Foreground) I don't think the Duke's ghost is upset with 9-year-old Frankie from Virginia snow blowing his walkway with the help of President Trump. Rather, this manly apparition appears to be scowling at the Bernie Sanders political yard sign, obviously put there by one of the hordes of democrats who have descended on the state for the Iowa Caucuses today.

John Wayne was always one of the good guys on the big screen, whether playing a cowboy or a military man. His characters were larger than life and symbolized what is great about America and our independent spirit. Everything I've seen suggests he stood just as tall in his private life and epitomized manhood. This obviously stands in stark contrast to the average pathetic gender-confused manbuns and scraggly beards in the democrat party.

So it's no surprise that John Wayne's ghost was rousted from his rest by the sudden infusion of this rabble to the great State of Iowa. What's a little odd though is that the ghost only utters old movie quotes from one of his characters from his lengthy career in films. The Democrat candidates make the mistake of knocking on his door during their canvasing. Here are some of those interactions with the Duke's ghost. Things seem to escalate as the afternoon wanes on...

ANDREW LANG: Knock, knock. Excuse me mister, but would you like a Universal Basic Income of $1000 per month?
DUKE'S GHOST: "Young fella, if you’re looking; for trouble I’ll accommodate ya." — "True Grit" (1969)

AMY KLOBUCER: Knock, knock. I'm asking for your vote today. If you think a women can’t beat Donald Trump, Nancy Pelosi does it every single day.
DUKE'S GHOST: "Hey, stupid! Where do you think you're going? Get back there with the herd, you muttonhead!" — John Wyatt in "Westward Ho" (1935)

JOE BIDEN: Knock, knock. You know, I got hairy legs that turn blonde in the sun and the kids used to come up and reach in the pool and rub my leg down so it was straight and then watch the hair come back up again... I love kids jumping on my lap.
DUKE'S GHOST: "Whoa, take 'er easy there, Pilgrim." — Tom Doniphon in "The Man Who Shot Liberty Valance" (1962)

LIZ WARREN:  Knock, knock. Here's the thing. Somebody invested in roads and bridges--if you've got a business, you didn't build that. Im'a get me a beer.
DUKE'S GHOST: “Now you understand. Anything goes wrong, anything at all… your fault, my fault, nobody’s fault… it doesn’t matter… I’m gonna blow your head off. It’s as simple as that.”
– Jacob McCandles in Big Jake 1971, directed by George Sherman

BERNIE SANDERS: Knock, knock. I'm a Democratic socialist, and...
DUKE'S GHOST: I'm gonna use good judgement. I haven't lost my temper in forty years, but pilgrim you caused a lot of trouble this morning, might have got somebody killed... and somebody oughta belt you in the mouth. But I won't, I won't. The hell I won't! - "McLintock!" (1963)

P.S. - Regarding  9-year-old Frankie from Virginia in the photo. If you need the refresher:

Frankie is a great American. He holds his hand over his heart and never kneels for the national anthem. He uses the boy's bathroom at his local Target store. He works for every dollar he has and never takes a handout or feel he is entitled to free anything. He loves God. He loves his country. He loves his Official Red Ryder Carbine-Action Two-Hundred-Shot Range Model Air Rifle. And he loves President Trump. Some of his little marxist friends say there is no such thing as Trump. No Donald Trump! Thank God! he lives, and he lives forever. A thousand years from now, Frankie, nay, ten times ten thousand years from now, he will continue to make America great again. Amen
Posted by DaBlade at 7:45 AM