The Wreck of The Bomokandi Bertha

No sooner is Bob Chapek named to replace Bob Iger as the new Disney CEO, a Jungle Cruise boat sinks at Walt Disney World.  Coincidence or villain? You be the judge. 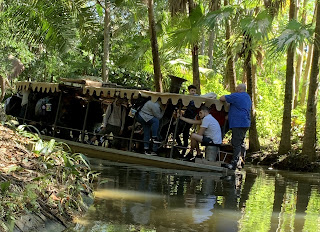 OK, a little rough in spots with my mashup between Gordon Lightfoot's The Wreck of the Edmund Fitzgerald and the Gilligan's Island theme song. This still is my favorite ride (or at least one of them). When we went to the Magic Kingdom last May, my daughter-in-law wouldn't let me ride it because it didn't "fit into our schedule." (it is a running joke between us, but seriously - the scars have not healed!) My brother said that his daughter likewise never  lets him ride this. So on our group chat of family to plan this fall's trip, the subject of this Jungle Cruise incident came up and my niece tried to take credit for us not getting shipwrecked.  LOL