Mike Bloomberg is a billionaire and Mike Bloomberg is a very tiny man. I had always assumed this narcissistic egomaniac would pick Jyoti Amge  as his number two, so the latest rumor that he was considering naming Hillary Clinton as his pick for vice president threw me for a loop. 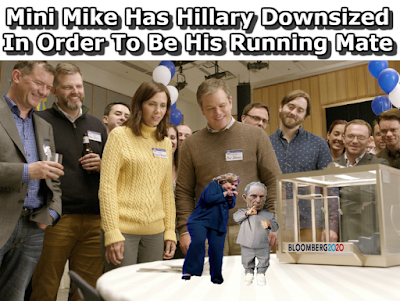 Then I remembered that mini Mike probably has a large laser miniaturizer machine in his basement laboratory, and I assume he would insist that Hillary be downsized in order to join him on the ticket. After all, he can't allow his VP to have a left cankle larger than himself. And her incessant coughing would be like a continuous rain forest mist of dog breath.

But then again, does Mini Mike have a death wish? Clearly if Hillary were a heartbeat away from the presidency, she would do everything in her power to suicide the guy. She might be a left wing marxist political hack, but she is a very good suicider. Maybe the best ever. No. It won't be Killery. My bet is that he will select 6'4" drag quees RuPaul.  I wonder what the polling would show for this matchup.