Chattering Teeth News - President Trump answers the left's call for him to postpone nominating a replacement for Ruth Bader Ginsberg's seat by doubling down and tapping Patricia McCloskey, the gun-wielding woman from St Louis. McCloskey, who with her husband, was the barefoot woman who stared down an angry BLM mob outside their home back in June. 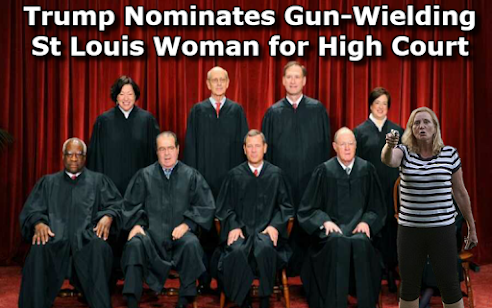 "Patricia will make an outstanding Justice and will protect your Second Amendment rights, this I will tell you," said Trump to DaBlade from CT Blog news in his exclusive interview.

McCloskey has already been to the Court in order to give her seat a deep cleaning from the numerous drool stains and satanic markings. She was last seen bonding with the other two woman on the court. She had Kagan in a head lock was overheard telling a racist joke to the hispanic Sotomayer. "I bet you think Roe V Wade refers to the two options to cross the Rio Grande, dontcha?"

When Roberts tried to intercede, she pistol whipped him in the temple. It was a light tap, as he was only out for a short time. This is the kind of judicial restraint a great jurist shows. Think about how tempting it would have been to pick off a few of those BLM stragglers threatening to burn their house down.