I couldn't watch the entire Hillary/ Obama "debate" last night. It wasn't so much a debate as it was a lovefest. They obviously have decided to tone down their rhetoric to appear civil by comparison to what's happening with the Republicans. It shouldn't be that difficult for them. They are cut from the same liberal cloth. Surrender in Iraq; tax and spend; re-distribute wealth; socialized medicine; open borders; etc.

Hillary was asked whether it was good for the country to have another Clinton in the White House. "It did take a Clinton to clean after the first Bush and I think it might take another one to clean up after the second Bush," she replied to applause from the mindless debris that made up the audience. I'm not sure what she is referring to. It is common knowledge that the "stains" left by husband Bill in the oval office and elsewhere were a whole lot trickier than anything that came before. I think we are all well aware of how a Clinton "cleans up after a Bush."

In an interview with ABC News, Hillary apologized for her husband's race bating comments he has made on the campaign trail. “I think whatever he said which was certainly never intended to cause any kind of offense to anyone,” Clinton said.

"Can you control him?," she was asked. “Oh of course,” Clinton replied.

I feel much better about the prospects of Hillary in the White House now that I know she can control her husband, don't you? I envision the Hillary term being sort of like episodes of "The Little Rascals." While Hillary is busy with matters of State, little Billy (Spanky) is up to all sorts of shennanigans! 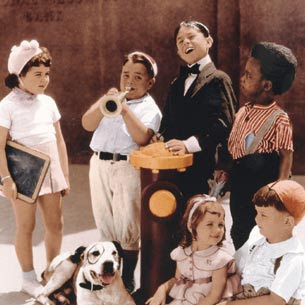 Speaking of Billy boy, did you catch his latest comments from the stump that are making headlines? "We just have to slow down our economy and cut back our greenhouse gas emissions 'cause we have to save the planet for our grandchildren. Everybody knows that global warming is real," stated Clinton.

Let's leave this yahoo in the past where he belongs, what do you say?
Posted by DaBlade at 7:11 AM