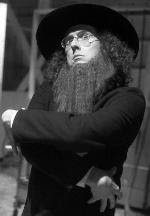 Apparently the Amish community is thriving. At least it is in Intercourse, PA., where Amish couples typically have five or more children. (My goodness. Talk about "drill here, drill now!) I had to read that twice to make sure I wasn't seeing things. Evidently Jebediah is not spending all of his time in the corn fields of Intercourse, PA. I'm guessing that the next town down the two-track is probably called Screw City. "Well what else is there to do?," thought I, as I read the story. You'd be surprised. There are cabinet makers and goat farmers among other nonfarming occupations. I can almost hear this introduction in Screw, PA.: "Hi, I'm Lester the Amish goat farmer in Intercourse."

The story goes on to state that, "A small portion of the increase (in their population) is also due to conversions to the faith." I am guessing that conversions are proportional to the average price of gas. At $4 bucks per gallon, the stink of riding on a horse-drawn carriage doesn't sound so bad. After all, I pay $60 an hour to do it on MacKinaw Island.

Then again, I don't think it is for me. I just don't think I could stand the itchy beard. If gas goes up to $5 per gallon, I'll probably just end up becoming another "boob on a bike".
Posted by DaBlade at 7:18 AM