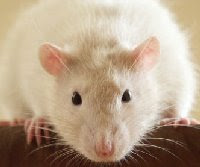 Democrats remind me of Charlie in the science fiction story, "Flowers for Algernon." You know, the pre-operation Charlie, before he "got smart". (not that there's anything wrong with that). When the going gets tough, I sometimes envy Charlie Gordon and his IQ of "68". He is constantly smiling and happy, too intellectually inferior to know he should be miserable as a janitor in a box factory. But after consideration and given the choice, I would rather not blindly walk around chanting "HOPE" and "CHANGE" with a plastic smile on my face and a "vacancy" sign between my ears. No, I don't think liberals have low IQs in the literal sense. Rather, I believe they are politically retarded. Algernon, the mouse in the story, learns quickly the correct turns to make in the maze so it gets to the cheese. Why then do liberals keep taking the wrong turns of socialism that history has repeatedly proven disasterous? Government cheese "ain't" free folks. And that's my memo...

On Sarah Palin and the feminists:
I loved Peter Hitchens latest: Why the sisters will be gunning for Palin

Watch as the ultra-feminist sisterhood back away in horror from Sarah Palin, John McCain's new running mate.

Mrs Palin is technically female, but she's enthusiastically married, hates abortion and thinks criminals should not be the only people allowed to own guns. She's everything Hillary Clinton isn't. In short, she's the wrong kind of woman.

Which just goes to show that ultra-feminists are not actually interested in promoting women because they're women. They pretend they are, but really their agenda is a campaign against marriage, in favour of abortion and for every other disastrous liberal and socialist cause that ever existed. In which case, they really can't go on pretending that their opponents are women-hating bigots.

Not least because they are the bigots - merciless when it comes to a choice between their own convenience and the life of an unborn baby.

Could Rush be right about feminatzis? His Undeniable Truth number 24 (out of 35) reads: "Feminism was established as to allow unattractive women easier access to the mainstream of society." Sounds about right to me.

On the idiot that is Charlie Gordon Michael Moore:
I don't know how this buffoon still manages to get my pulse racing with his lunacy. Maybe it's because he is a symbol of what has become mainstream in that other party and that makes me sad. Now he has posted a blasphemous mock letter to God on his website, crediting God with sending Hurricane Gustav on "the third anniversary of the Katrina disaster AND right at the beginning of the Republican Convention." "Divine irony," he calls it. He goes on to say that he doesn't blame God, (How gracious of the slovenly one) stating, "I know You're angry that the Republicans..." Moore ends this drivel with this mock plea: "So please God, let the storm die out at sea... If you do this one favor for me, I promise not to invoke your name again. I'll leave that to the followers of Rev. Dobson and to those gathering this week in St. Paul."

Why would you make a promise not to pray again to a God you purport to believe in? And why would you credit God for Gustav when every "thinking liberal" knows there is no God? No rational religious person could possibly balance faith with abortion rights. These are mutually exclusive deals. Besides, we now know that global warming is the cause of this phenomenon known as hurricanes, and that these massive spinning cyclonic storms that didn't exist before SUVs.

So in conclusion, that is why I believe that the mouse Algernon would make a better candidate than Obama.
Posted by DaBlade at 9:07 AM