I have this movie idea but it's still in the conceptual stage.

Here's the setting. Picture a large Pumpkin pie stranded and adrift on a lifeboat with Detroit Tiger, Prince Fielder. One is a traditional holiday dessert with a blend of warm spices and the other is a very large and hungry Tiger, both on a very small boat. 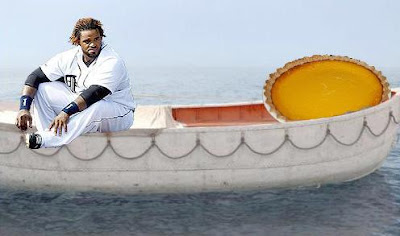 SPOILER ALERT! Will the Tiger eat the pie? The suspense will slowly build throughout the movie, as time and time again the Tiger picks up the boat oar, swats and misses the huge, round and stationary pie. Apparently, his swing can't be counted on when it counts the most, much to the delicious delight of the baked purée of pumpkin.  I'm still working on the ending, but I think they eventually work out their differences, fall in love and get married.

I was sharing this  movie idea with an ex-buddy of mine. I say "ex" because he accused me of stealing my original idea from some book based movie at the theatres called "Life of Pi". 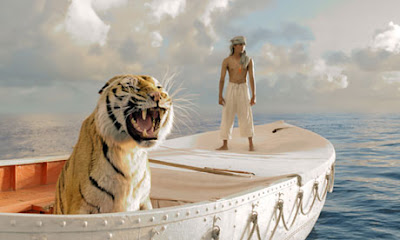 I'm sorry, I just don't see the similarities.
Posted by DaBlade at 8:58 AM