If you're like me, you like to sometimes 'time travel' in your head back to your childhood by viewing old photographs. I was in one of those melancholy moods this morning, browsing through the digitized version of old photo albums on the computer when I stumbled upon this gem, circa 1968.-ish. 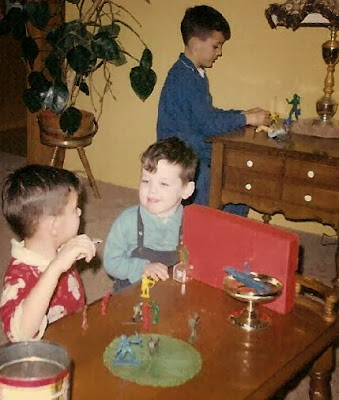 Pictured - foreground, left to right: Jerry (that's me), brother Donnie, and in the background is brother Greg.

My apologies to sister Cindy and brother Rick for not appearing in today's special feature pic, but I will get them next time. I'm sure it's their own fault, as I'm guessing they thought they were too good for this game, now that they were teenagers.

I'll try to keep this analysis short (yah, right!), but let me begin by saying that I've probably glanced at this old photograph dozens of times. You know how it is when you have a folder with hundreds of photos inside. Each individual photograph might merit a casual millisecond glance before you click anxiously to the next one. It's sort of like the amount of attention your resume' (that you've spent weeks constructing) receives from today's hiring managers. You're not sure what you're looking for, but you know you'll recogize it when you see it. Like I said, I've glanced at this photo before - at first blush, nothing special happening here - but apparently this morning is the first time I've actually LOOKED at it closely.

THE SCENE:
It's obvious to any male from my time period what my brothers and I are doing. However, for the sake of any youngin's who stumble by and have never played with any toy that wasn't electronic, let me explain. We are playing Cowboys & Indians & Army Men (at least Donnie and I are playing that. I'm not sure what brother Greg is playing, but I'll get to that in a moment).

Horror of horrors, kids! We didn't have Wii-Station 4, Intendo or Gamecast game consoles. We had whatever was in the tin container pulled from the toybox at the end of the hallway (as well as our well-developed imaginations). Some days we would only play Army Men. Other days we would play Cowboys & Indians & Army Men & Dinosaurs. When we were real ambitious, we might try a game of Matchbox & Lincoln Logs * Playskool Farm animals. Or any combination therein.

In this particular photo, it appears that Donnie and I are recreating the true story of Thanksgiving by playing a straight up game of Cowboys & Indians & Army Men. I don't actually remember the scenario, but its obvious to me by looking at the position of the plastic molded action figures that in this scene we were celebrating the life of the giant Indian chief lying prone on the makeshift funeral pyre (which is actually some kind of center piece on the coffee table, but in our world you use whatever prop you have).

I don't remember why the giant Indian chief died this day, or why army men are attending the funeral heavily armed. Can the infantryman be the pall bearer and still hold his machine gun, and just what is the mortar launcher pointing at?  Maybe its just a 21-gun salute and the projectile is for lighting the pyre? Sorry, I just don't remember. Is that an electronic football player piece on the table and paying his respects?

But that is not what I wanted to blog to you about today.

Family, we can no longer ignore the very disturbing game Greg appears to be playing at the lamp table. Intervention?  I have blown up the object of his attentions here, but as you can see - it is now somewhat pixelated. This of course will not stop me from doing my best at Play-by-play analysis. 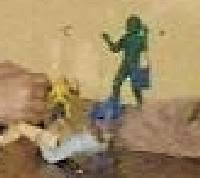 A few questions come to mind. Why is this giant green Indian not attending his chief's funeral, which is quite obviously already under way? Also, I don't recognize that piece lying prone at his feet. It's large, and not a regular army man or giant indian. It can't be Stretch Armstrong, as he doesn't hit the scene for another decade or so. Could it be sister Cindy's Ken action figure? Is it just me, or is it not wearing any pants? Greg did always state that he wanted to be a doctor while growing up.

Lastly, is that a purse hanging over the giant indian's shoulder? I really don't think that came with the full action set and appears to be made from construction paper?

I'm open to suggestions as to possible explanations.

Now in all seriousness for a moment, what gave inspiration to this silly blog today was the following story I stumbled upon, and in which the title is self-explanatory. I only wish this were possible with my  photo above. Hey Donz, maybe we can play again with as much wreckless abandon in Heaven?