"Deer just not as funny", state Wildlife officials, ever since an arrow has been removed from it's head 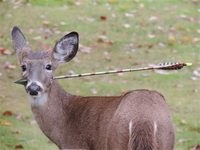 The arrow-thru-the-head deer took the internet by storm last week, as pictures of the little fella's predicament met with gasps and an outpouring of sympathy.  So you would think the latest news that Wildlife officials have removed an arrow from a young deer's head and released the animal back into the New Jersey woods would be met with unanimous joy.

You would be wrong.  Chattering Teeth was on the scene with crack (smoking) reporter, Gullible Gabe, to interview this New Jersey property owner, Mr. Johnson.

MR JOHNSON: I was just sitting on my porch enjoying a good cigar, when I notice this young deer approaching from the distance. My heart sank as it got closer and I spotted that an arrow had punctured through its tiny little head and was still protruding out both sides. Then it saunters right up to me in my front yard and starts TALKING and TELLING JOKES!

DAY ONE: "Hey, it's really great to be here! I am a wild and crazy deer! Don't forget to tip your poacher. Thank you. I'll be here all week. Try the venison smoked jerky. Hey! Thank you."
"I was flabbergasted," stated Mr. Johnson. "It was amazing he was still alive and walking around, let alone in such good spirits!."

According to the property owner, the deer kept this up for about an hour and a half, before he finally wandered back off into the woods.

"I wanted to tell somebody about this, but I was convinced nobody would believe me. I doubted it myself, until the next night at dusk, the little fella approaches my front porch and repeats his routine. I just sat there laughing so hard I had tears flowing out my eyes! This deer was hilarious!"

Mr. Johnson insists the deer returned every night for the past week, telling jokes and eating the apples on the bait pile.

DAY TWO: Two rednecks from Arkansas were out hunting. They decided to separate to get a better chance of catching something.The first redneck says to the other, "If you get lost, fire three shots into the air every hour. That way I can pinpoint you and find you."After about three hours, the second redneck finds he is really lost. He decides to fire three shots into the air as the first man told him. He then waits an hour and does it again. He repeats this until he is out of ammo.The next morning, the first redneck finds the second with the help of forest rangers. He asks the second redneck man if he did what he told him to do.The redneck answers, "Yes, I fired three shots into the air every hour on the hour until I ran out of arrows."

DAY THREE: If you like your arrow, you can keep your arrow. Period. That would also apply to arrows you are not so fond of! Hey! Did somebody hear a rim shot!?

DAY FIVE: I get no respect. My bath toys were a toaster and a radio.

"By the sixth day, the deer just stumbles up and starts playing a banjo. A FREAKING BANJO for a full hour. I was laughing less and less each day, and I attributed it to a possible loss of blood. That's when I called the authorities."

The biologists who did the procedure say the arrow had not damaged any major arteries or organs and the deer's prognosis for survival is excellent. (The arrow was removed) The animal was treated with preventive antibiotics and released back into the wild.

So I'm back on my porch the next night, waiting for a healthy arrowless deer to come crack me up. I see him approaching without his banjo, and I start to grin in anticipation. Then, he starts in with some dramatic readings, and I'm like, WTF!

The deer then wandered off into the New Jersey woods, where it was attached and eaten by Governor Chris Christie. 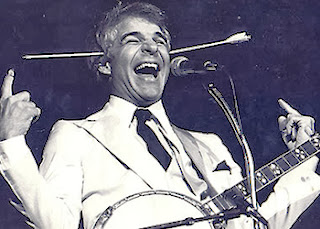