DISCLAIMER: Eminem did not catch fire, and Brent Musburger did not really smoke crack in the making of today's blog entry

If you're like me, after a hard day at work you like to go home, put on some baggy jeans down to your knees, hit on your crack pipe while grooving to the latest Eminem tune. That's why the following headline struck me with panic:

No longer trusting the media, I jumped in my Chrysler (Imported from Detroit)... and drove the hour south to get the true story.

Thankfully, the first thing I realized upon my arrival was that the structure was still standing. What a blow to Detroit, had this boarded up 747-square-foot dilapidated brick house with 3 beds and 1.5 baths on the beautiful east side of Detroit been destroyed. Not to mention the loss to humanity of the future site of the Eminem museum. 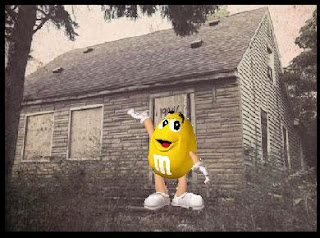 I shuddered at the thought, as I approached the porch in a zig-zag pattern in order to avoid discarded hypodermics scattering the lawn and walkway. I nonchalantly waved a hand in front of my face, as the drive-by bullets whizzed by as thick as skeeters on the back deck of a steamy Michigan summer night in paradise.

Just as I thought. The house was not vacant, as was reported in the story.

At first blush, I thought my knock on the door was answered by Marshal Mathers his-own-self. The gentleman opened the door a crack, but left it chained. Bloodshot, yet lidless eyes stared vacantly at me from a stubbled and pasty-yellow face. My nose was immediately assaulted by a mixture of smoke, whiskey breath, vomit and feces.

I quickly recovered and realized this hoody-less gentleman carried himself with much more confidence and class and couldn't possibly be the previous occupant who had made this humble abode famous.

"Nice ride cracka!," he mumbled, as he stared over my shoulder at my car idling in his dirt drive.

"I heard there was a fire here last night," I answered. "Everybody OK?"

Just then, a disheveled Brent Musburger wearing a stained and torn mini skirt appeared behind the gentleman inside the home. "He's fine, just a little accident with the crack pipe" slurred Musburger. "Good thing he melts in your mouth and not in your hand."

"I am really uncomfortable right now," I said, as I turned and fled the scene poste-haste.

Some folks may think Brent Musburger's surprise guest appearance rather random in my work of fictional art above. If so, they didn't see this gem of an interview during the halftime of the September 27th football game between Notre Dame and Michigan. Broadcast Magic baby!