The Raisins of Wrath and the fall of progressivism

Chattering Teeth Pictures presents a first look at The Raisins of Wrath, a major motion picture still in development (in my head) and what is sure to be a blockbuster hit. The Raisins of Wrath is loosely based on John Steinbeck's The Grapes of Wrath, although it is updated for the times. Differences from the original include an underlying theme of rediscovery and empowerment of individualistic ideals over government bureaucratic control and the result is a happier ending.

PLOT DRAFT:
Barack Obama is a former migrant community organizer who became President by riding on the back of a unicorn and throwing candy canes and free condoms to the citizenry.  This film takes up around the mid-point of his second term when he is forced from his Washington D.C. Pennsylvania Avenue home by Tea Party Patriots during the new American depression he caused. He sets out along with thousands of others in search of jobs, new homes, and hope for a brighter future. Alas, poor Barack can't find any openings for a community organizer (or free health care) anywhere.

Here is a still frame from a scene in the beginning of the picture when Barry is still president, just as everything begins to unravel around him due to the collapse of his signature health care bill. 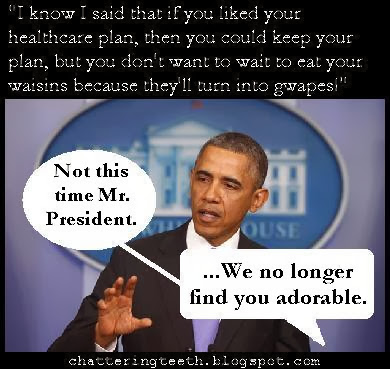 After he is removed from office, the country rejects the tyranical liberal progressive activist government and once again embraces the ideals of freedom and liberty that had originally made this county great. Almost over night the country begins to heal. The economy roars back with implementation of free market principles. With Big Government on the run with all its food stamps and other "freebies", the traditional American family takes center stage once again - with a married mom and dad taking their children to church to give thanks to God. The sun begins to shine on this country's face once again.

I'm still working on the ending, but rest assured it will be inspired by that "I'll be there" speech made famous by the late, great Henry Fonda in the 1940 original...

Here is the original: