This linked article would have us believe that the Nazis invented photoshopping in 1914 and that the face in the crowd in this famous photograph of Munich's Odeonsplatz is not really a young Adolf Hitler’s.

However, after closer scrutiny over a steaming mug of morning coffee and squinting through my readers, I am prepared to set the internets on storm by proclaiming this photo legit. That is definitely Hitler with the funny 'stache. 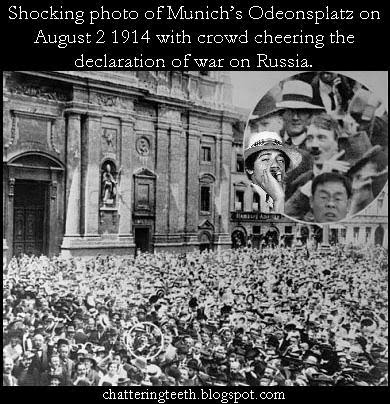 Now as for that Chinese dude in the bottom of the blowup..
I'm almost positive I've seen that dude from somewhere before.

A Schnitzel Dooms Pun
Posted by DaBlade at 7:39 AM