If you're like me, you like to start your Saturday by giving a friendly kiss to the live poisonous water moccasin you keep in your pillowcase, slip into your onsie unitard and surf the news on the internet while sipping hot cocoa. 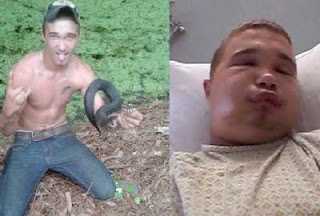 ANNOUNCER GUY:  Liiiive... from the Chattering Teeth Studios, in beautiful Mundy Township - it's time to play, A "BAD NEWS, GOOD NEWS" WEEK IN REVIEW!!!
Cue Theme song (Think "horns" and "drum rolls" and other various non-complimentary musical instruments played by deaf people for the first time - or your favorite Jazz song - BaBum DaDaa!)
start fog machine?
...It's your favorite blog feature game show where I first link a "BAD NEWS" current event, then comment with the "GOOD NEWS" spin from my fertile mind that will quite literally change your world! Immediately. Seriously. Literally, as in symbolically in my own mind. So lets meet this week's contestants!
#1 - THE BAD NEWS?
North Korea says it test-fired a 'world-level strategic weapon'
North Korea announced Saturday the successful test-firing of a submarine-based ballistic missile -- a technology that would offer the nuclear-armed state a survivable second-strike nuclear capability.

THE GOOD NEWS?
It has the accuracy of a Dennis Rodman free throw.

#2 - THE BAD NEWS?
Tom Brady will be suspended by Roger Goodell for role in DeflateGate,
This story is apparently very popular, and really what the media (and therefore, the 'State') wants you to focus on, because what could be more important to the future of this nation than the pounds of pressure in a football?
THE GOOD NEWS?
The snarky and rude Jim Gray (see 5:37; 8:16 of the video at linked article) gave away the real reason why the media elites are demanding Tom Brady's head, and it has nothing to do with deflated footballs, or even football at all.

The profession of media elites draws a fair amount of @$$h0les, but is there a bigger one than Gray? He might as well have said, "The future of NFL quarterbacks must not belong to those who insult obama."

and lastly,
#3 - THE BAD NEWS?
Jade Helm Is For The American People (and the domestic takeover)

Jade Helm is a planned eight-week military training exercise within our borders in preparation for Michelle Law (formerly known as "Martial Law", but that sounds too harsh).

This commenter (retrobit) says it all: "With China building it's Navy and other military forces to unprecedented levels, Russian adventurism, an administration about to hand over leading state sponsor of terror, Iran, the capability to arm itself with nuclear weapons amid chants of "death to America", with huge cuts in military spending, the mission of our forces is to fight within the cities and towns of the USA? This is what the remnants of our once great military is training for?  And nobody except paranoid loons sees anything out of the ordinary?  Are you kidding me?"
THE GOOD NEWS?
Here is your Jade Helm command structure.

Keep your powder dry my friends.