Finally. some clarification from the Jebster.

Let me be clear:

“If we’re all supposed to answer hypotheticals, and knowing then what I know now... or is it "knowing what I didn't know then, now??"... Read my lips. I would not have gone into that interview with that Megyn Kelly chick.”
Certainly, mistakes were made in that interview. There was no reason to go to there, given my faulty intelligence. You know who else would agree with that statement? Hillary Clinton.

We interrupt this blog to bring you this very important Nursery Rhyme.

A Tutor Who Tooted 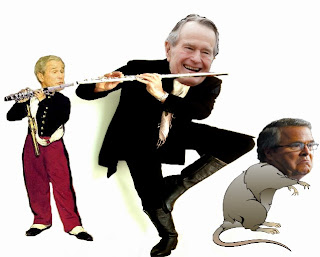 Jebster, DROP THE CHEESE and step away from the flute...

A big, fat potato lay down on a clod
In the shade of some burdock and tall goldenrod,
And he dreamed he were king of the whole garden plot,
With a palace and throne, and a crown with a lot
Of jewels and diamonds and gold till it shone
Like the front of a show when the lights are turned on.

He had to be minded by all of the plants;
When he whistled the radishes knew they must dance;
When he tooted his horn the cucumbers must sing
To a vegetable crowd gathered round in a ring.
He made all the cabbages stand in a row
While a sunflower instructed them just how to grow;

The bright yellow pumpkins he painted light blue;
Took the clothes off the scare-crow and made him buy new.
He strutted and sputtered and thought it was grand
To be king and commander o'er all the wide land.
But at last he woke up with an awful surprise
And found a blind mole kicking sand in his eyes.
Posted by DaBlade at 8:00 AM