MOE, as in Moe Howard, an American actor and comedian best known as the de facto leader of the Three Stooges.

HOMINID, as in any bipedal primate mammal of the family Hominidae, also known as great apes (per Merriam-Webster).

WARNING! The following is a GRAPHIC depiction of Moe Howard in an evolution sketch, and may be offensive to lovers of the slapstick profiteer. 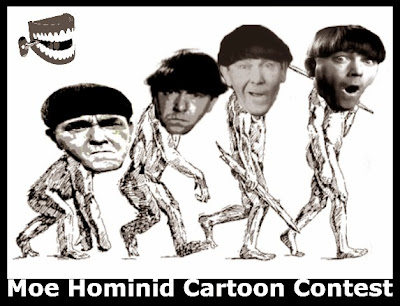 BREAKING NEWS
The Three Stooges Fan Club has posted this bizarre warning on TVLand, which some have interpreted as a threat of more eye-gouging, hand-biting and belly-punching from their 71 highly trained fanatics. 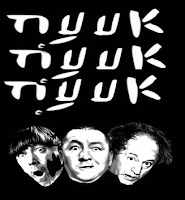 and that's the memo.

In other news, the mainstream media is now insisting that Pamela Geller be forced to bake a cake for jihadist's wedding.

In conclusion, its important to note that we are at war with the izlamofascists. As for the Stooges? Stand down! You wouldn't scream "FIRE" in a crowded theater, and you sure wouldn't scream "NIAGARA FALLS" at a Stooge festival.