And now, what handicappers and fans have been dreaming of, and what is being called the fight of the century... 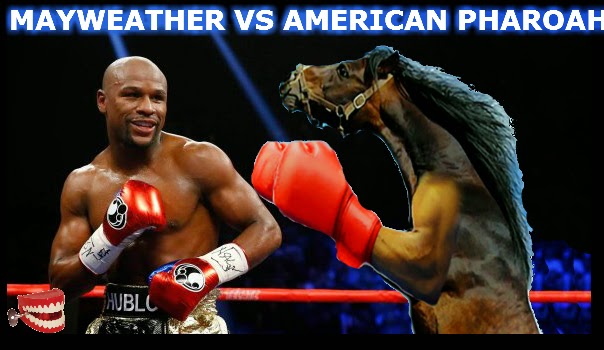 American Pharoah'S trainer, Bob Baffert, says his colt has proven to the critics that he can take a punch and keep on hoofin'. "It was a tight finish, but this horse is so special," said the white-haired trainer. "When he finally nosed Dortmund and Firing Line on the final stretch for the win, I knew we would be going after Mayweather for the Triple Crown Championship Belt."

Mayweather just had to beat a single Filipino opponent in the ring. American Pharoah had to beat 20 other horses, all the while with a crazy short Mexican on his back who was whipping him repeatedly.

Mayweather's corner has yet to respond with an official comment.
Posted by DaBlade at 4:31 PM