A weasel by any other name

Time to play... DID YOU KNOW?
Today's topic: Name-changing weasels

The stoat is a short-tailed weasel which sports a brown and cream coat during spring, summer and fall. In the winter months, this weasel changes its coat to a pure white, and it changes its name (Please call me "Ermine").

I don't know about you, but THAT FEELS RACIST to me. WHY DOES THIS WEASEL change its name based on its color?  Do ermine lives matter? 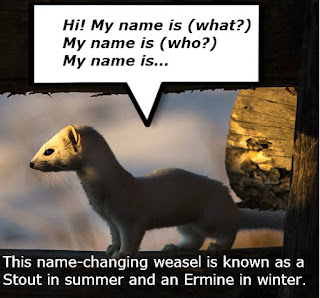 According to wiki, "In the late 19th century, stoats were introduced into New Zealand to control rabbits. The stoats have had a devastating effect on native bird populations."

So instead of a land bountiful in rabbits and birds, it is apparently chock full instead with weasels.

Next week on DID YOU KNOW?...
we will feature a scrawny black and white weasel species known as the Soetoro during its early years. No spoilers, but you won't want to miss what this weasel does after its name change (then again, maybe you will).

HERE IS A PREVIEW:
In the late 20th century, the Soetoro was introduced into the United States. It has had a devastating effect on the American populations, and is in the process of replacing them with progressive weasels.