Sometimes, I run across something so incredibly stupid and ignorant, I am at a loss for...  a collection of distinct meaningful elements of speech or writing, used to form a sentence of coherent thought. 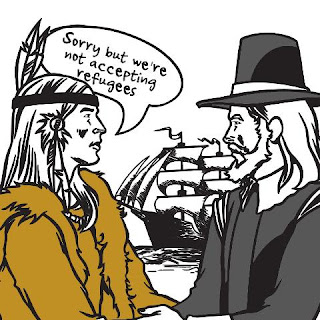 Because we all know that the Puritan pilgrims of yesterday and the Izlamofascist terrorists of today are morally equivalent. In fact, I would venture to argue that had the roles been reversed and it was Izlamofascists landing on Plymouth Rock in 1620, the Indian's fate would have had e a much rosier result, don't you?

Let's go to the mailbag for some mental palate-cleansing...

I am a professional beekeeper who tries to mind his own beeswax. I had a colony of bees, went away for a week, came home to no bees and a hornet's nest inside. They have killed all the bees and robbed all the honey. What is a good way to prevent hornets from attacking my hive? 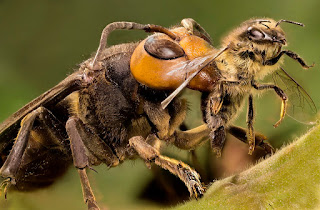 When a giant hornet refugee migrates to a European bee colony it produces a pheromone that attracts all of its siblings to descend on the European honey bee’s home and begin the slaughter. The hornet easily decapitates honey bees in a simple movement of their large powerful mandibles. One single giant hornet can kill 40 honey bees in a minute. Thirty of these over-sized hornets can wipe a 30,000 strong bee colony out in a little over 3 hours. After the hornet’s thorough massacring of the hive they take back the bee abdomens to feed to their children, leaving their legs and heads to fester. The hornets also take their honey stores and larvae.

My advice would be to kill them where they live, and to certainly not invite them into your hive. Be aware that this strategy may meet resistance by a portion of brain-deficient honey bees who believe these hornets should be allowed to 'settle' in the hive.These useful idiots should be ridiculed and marginalized if survival of the species is important.
Posted by DaBlade at 8:03 AM