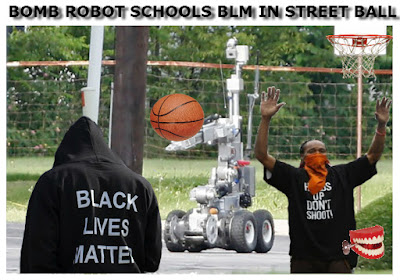 CHATTERING TEETH NEWS - A Dallas police bomb robot surprised a group of Black Lives Matter militants when it rolled into the middle of their basketball game. The group immediately scattered, as the robot is the same model as the one that blew up their former sniper cop-killer point guard.

"I was running away, when I looked over my shoulder and I saw the robot dribbling the basketball," said one BLM militant. "It's like he was challenging me to a game, so I'm like 'it's on like Donkey Kong!'"

The bomb disposal robot is commonly used by police, military and other first responders around the world. It is wheeled, weighs 485 pounds, and mounts various sensors and a robotic arm with grippers.

"He couldn't jump, but he couldn't be stopped in the paint either. Not that he needed any layups. He was launching bombs from all over the court," said one winded gang banger through his bandana. "I'm like, 'hands up, don't shoot,' and 'I can't breathe,' but that mo fo just be drillin' it on us all day long!"

The final score - the police bomb robot 11, the BLM gang 0, but nobody seemed to care, as there were smiles and healing taking place in a community desperately in need of both.

"It felt nice," said a neighbor who had watched the whole scene unfold. "Everybody try to make cops seem like they are bad but actually they not, they friendly just like everyone else is," said the neighbor.

After a break and a 40-ounce, the BLM were ready for a re-match.

"How about a game of P-I-G?," joked one of the militants.

The explosion that followed could be heard from several miles away.