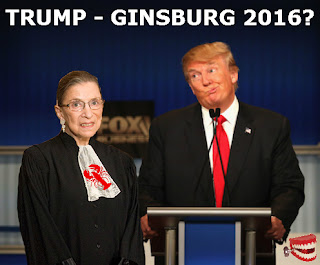 CHATTERING TEETH NEWS - Showing once again why he is the master of misdirection and reality TV, Donald Trump shocks the political world by naming Ruth Bader Ginsburg as his 2016 running mate. This selection comes a day after Trump called for Ginsburg to resign from the court, stating, "Her mind is shot."

Those of us still paying attention should have taken this as a clue, as a "shot mind" would certainly be a prerequisite for anyone desirous of being Trump's VP. Trump and Ginsburg are also both huge Hillary donors and supporters. This would also explain why the crusty old liberal hack, Ginsburg, accepted the nomination shortly after calling Trump a "faker".

Of course, this is just speculation. RBG couldn't be awakened for comment.