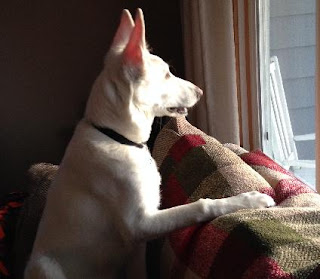 So there I was, head hung low and standing in the darkened bathroom again for the second night in a row. It's safer here, for some reason. The crackles, fizzles and whistles don't bother me as much as the bangs, but I could do without any of it.

The rest of the family are just wandering around the house like there's nothing f&^%ing wrong! Do they not hear the random and sporadic loud explosions and sonic booms? Do they not feel the house rattle and shake after each one?

I think I know who's to blame. I'd bet a homemade piece of oven-dried beef jerky treat that it's that black cat on Grandwood who's always slunk low in his yard and staring at me with those evil, green orbs  when I walk by his house every night on our stroll. He doesn't react or make a peep, even when I holler at him and lunge against my restraint to get to him. "Take this harness off and give me just 30 seconds alone with him," I bark. But they never do.

I'd blame the Lab on the corner, but I don't think he's too bright. He can make a racket, but he does not want a piece of me. I eat raw meat like him for breakfas.

HOLY SCHNIKES!!! How did you not hear that? If you heard that, you would have pasted your ears against your skull in nervous anxiety and confusion. But no! Those silly, round and bald protrusions on the side of your heads are as useless as ever. Not even pricked forward in curiousity.

Don't get me wrong, I love my family but they're almost completely oblivious to their surroundings. How they don't constantly bump into the walls is beyond me. I've never seen them even sniff one pile of excrement! I'm not kidding!

At least they know when it's time to hit the hay. They are laying in bed now. OK, I'm game, let's try this. I'll just curl up here on my bed in the corner.... Ahhhh... this is nice. Head on my paws with the tail tucked... thinking about chasing that squirrel by the bird feeder again tomorrow...

"OH HAILS NO!" "Here we go again. NO, No, don't get up! I'm just gonna wander, slink and pace around the darkened house indiscriminately for a little while longer while I try to reason this out... maybe spend some more quality time in the bathroom. Gonna play it by ear..."

Hmmm, maybe the cat is innocent and it's that rat bastard squirrel... Or they're working in concert...?

*BOOOM*
Gonna be a looong night. 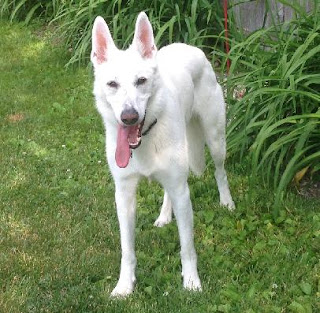