All Democrats are Animals

When Planet Green at The Mother Nature Network lectures on democracy, you know you're in for a treat.
THIS JUST IN, 60% of cud-chewing standing Red Deer voted for Hillary! 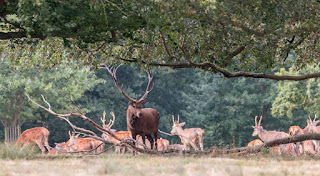 Democracy takes flight
Queen bees and alpha chimps aren't voted into office, but that doesn't mean they're despots.
I hate to quibble, but we don't have to go back in history to come up with example after example of elected despotism. Turkey's Erdoğan, Russia's Putin, Iran's Khamenei, and our very own Obama are/were despots voted into office by the majority. Let's continue.

Scientists have begun to view many animal species as de facto democracies, where majority rule ensures survival more than tyranny can.
Again. this is only sentence 2, but "majority rule" and "tyranny" are not mutually exclusive. (see above). Proceed with caution.

Our own species' democratic tendencies date back at least to our prehuman ancestors.
Here we go. I csee making a compelling case that Pelosi, Schumer, and the rest of their ilk are products of their "prehuman ancestors". The rest of us are children of God. We aren't done with even the first paragraph. I suggest you gird your loinage area if proceeding.

"[S]hared decision-making is likely to be of great importance for the evolution of stable social organizations, explaining why it appears to be common in social animals," biologists Larissa Conradt and Timothy Roper wrote in a 2007 study, "Democracy in animals." Most species don't belabor politics like humans do, but our democratic roots can be seen across the animal kingdom — which, in many cases, is more like an animal republic.

WE INTERRUPT THIS BLOG POST to bring you this urgent disclaimer by announcing that your blog host was unsuccessful in reading his own linked story in its entirety, and so therefore any opinions and conclusions cannot be relied upon or used as source material in any major college theses... Unless you want an 'A+'.

If you proceed to the next slide after the intro, you learned that "the red deer of Eurasia live in large herds, spending lots of time either grazing or lying down to ruminate."

In other words, they sound like your typical democrat voter base, laying around eating Cheetos while watching Oprah on TV.
Scientists have noticed that herds only move when 60 percent of the adults stand up. However, if only 48% of the red deer herd stands, the rest are called "hanging chads" and not allowed to play in any Red Deer games.

In fairness to the red deer, it's not a complete analogy, for they are producing something of value. If you watch them closely, you seem them manufacturing meat for human consumption. Therefore, they are not a complete drain on nature and I take back my original disparaging remarks.

That's all the time we have, folks. I have to go to work to produce meat for my family's table. We'll ruminate more tomorrow.