Was there Russian meddling in the preparation of Sarah Huckabee Sanders' chocolate pecan pie?

I was binge-watching the Netflix yule log for several hours (NO SPOILERS! I'm not finished watching!) when this stunning photo appeared in my inbox from an anonymous tipster with a hidden oven cam. 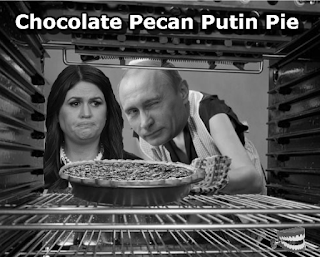 REALLY???? Isn't this the same pie from Sarah's tweet? 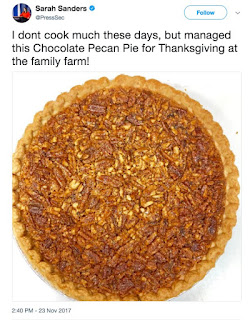 Chattering Teeth News -A bombshell indictment may be forthcoming in the alleged pie tampering investigation, this blog reporter has learned. Special counsel Robert Mueller's sole focus will now be dedicated in getting to the bottom of #piegate. Was there Russian meddling in the preparation of Sarah Huckabee Sanders' chocolate pecan pie?

Once this investigation is completed, Mueller promises to get to those deleted Clinton emails, the uranium to Russia, and the fake dossier thingy (if there's still time).

The White House press secretary swears she didn't share a fake pie picture, and the White House lawyers are hopeful that the investigation will end soon and absolve Sarah of any kitchen collusion wrongdoing.
Posted by DaBlade at 9:05 AM