Chattering Teeth News - Speaker Paul Ryan (R-Wis.) has enlisted the help of a fictional eunuch politician from Westeros to give the mandatory anti-sexual harassment training to members of congress. Senator Al Franken immediately  groped and "forcibly kissed" the eunuch trainer upon his arrival without his consent. 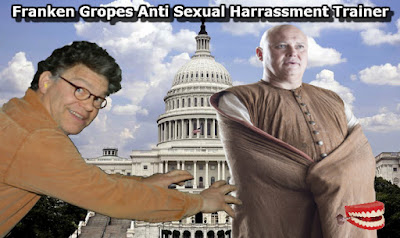 Fans of the George R.R. Martin books or the hit HBO series Game Of Thrones will immediately recognize the trainer as none other than Lord Varys, a/k/a 'The Spider', a/k/a 'The Master of Whisperers on the King's Small Council.'  The world of GOT is filled with perversion, pedophiles and criminal misogynists making it a perfect reflection of congress.

As Varys has explained this, he was traveling  with a "a troupe of actors" when he was forcibly castrated 'root and stem' by a sorcerer. What better solution to the sexual harassment problem than the forcible castration of most our congressmen? I say most, because I assume there are still a couple gentlemen left in these chambers.

Then there is Paul Ryan, which castration is not necessary as he has already lost his balls to McConnell a long time ago.

I agree with Mark Levin in calling for Ryan and McConnell to resign. This problem in congress and the senate may not have started with them, but clearly it is under their watch that the sexual predatation is running rampant among our elected representatives.