Sen. Rand Paul attacked by neighbor while mowing lawn at his Kentucky home

Chattering Teeth News - Senator Rand Paul was blindsided and assaulted by his neighbor, a 59-yr-old retired Democrat doctor named Rene Boucher, while he was mowing his lawn. It is unknown at this time what set this dude off, or if having a girl's first name contributed to his rage, but it has been reported that the two have had an ongoing feud. 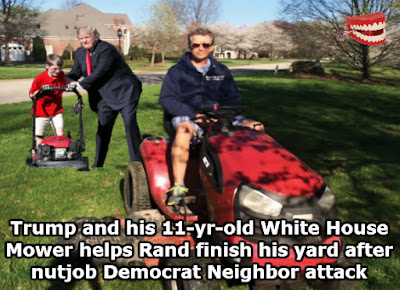 Obviously, the guy has a few screws loose.

I could hypothetically understand administering a blind flying tackle to knock my neighbor off of his tractor mower if he happened to be mowing his lawn before noon on a weekend - but reports state this attack happened around 3:20pm.

Maybe the guy was upset with Sen. Paul because he would only mow his own yard and not his neighbor's - You know how democrats insist on taking the goods and services of hard working Americans for themselves.

It has not been reported anywhere, so it is not clear if this doc Butcher screamed the popular Antifa chant of
"NO USA AT ALL"
...as he launched himself  on the diminutive constitutional conservative.

Trump offered Rand the use of the 11-yr-old 6TH-grade Virginian boy named Frank, the official White House lawn mower. He also tweeted that Rand Paul's nut job democrat neighbor and attacker should get the death penalty.

“President Trump, where is your leadership?” Chucky Schumer said.

CNN's Jake Tapper reports, "...sometimes the phrase 'NO USA AT ALL' is said under the most beautiful of circumstances."