US POLITICIAN PEPPER SPRAYS HIMSELF IN CALL TO END SCHOOL SHOOTINGS

OK, I have to admit that this dude may be on to something. As I watched this crazy person spray himself in the eyes with pepper spray. 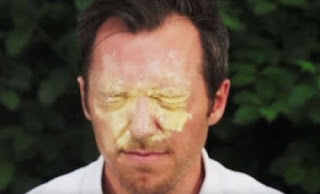 I was memorized MESMORIZED (thanks cube) by the depths of his total, utter and complete ignorance.

I was distracted and forgot what I was doing, as he dunked his head repeatedly in a bucket of sudsy water. Imagine if an entire classroom of kids sprayed themselves in their own eyes when confronted with an evildoer. This would be way more effective than an armed response, don't you agree?

“It’s incredibly painful, and now I just can’t see anything.  It’s just unbearable, it’s like lava in your eyes.”

You might get the same painful response with posters of Hillary on every door entrance during school hours.