No, I really don't care for the Fake News statist media 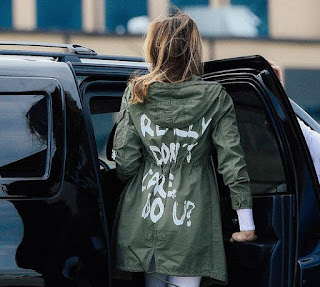 Melania wears rain coat with "I REALLY DON'T CARE, DO U?" written on the back in big white graffiti lettering and the leftists are having a field day mocking her. Fake news is reporting this to be evidence for Melania's lack of empathy toward illegal crumb crunchers. The president tweeted it was actually a message directed at Fake news CNN. If that were the case, a huge graphic of a middle finger would suffice. Nobody in their right mind really believes Melania doesn't love children. And somewhere, the nut job Rachel Maddow gently weeps.

THIS JUST IN!!! ANOTHER CHATTERING TEETH EXCLUSIVE!
Hilery (sic) visits Planned Parenthood Flea Market trafficking in the selling of baby parts while wearing a Plus Sized Hoodie with "Another One Bites the Dust" on the front to criticize Melania's stilettos. 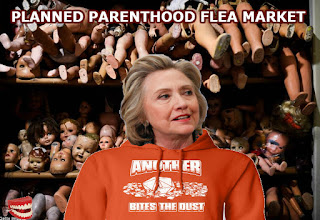