Chattering Teeth News - 2015 Breeders' Cup and Triple Crown Winner American Pharoah was found hung in his stall (at least that's what the ladies said) dead at the age of 6. 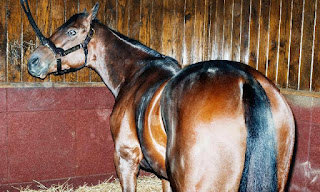 Empty bottles of cheap Kentucky bourbon were found scattered among the hay bales, and medical examiners' preliminary results reflect he may have also overdosed on horse tranquilizers.

American Pharoah's death by his own hoof comes on the heels of the 2018 Belmont Stakes where Thoroughbred racehorse Justify becomes just the 13th Triple Crown winner, and first since AP won in 2015 breaking a 37-year drought. Maybe he was just jealous and sad that the little people no longer rode him in circles, and nobody draped him with flowers wreaths anymore.

The Foundation for Horseycide Prevention recommends that stalls "JUST SAY NEIGH" and have a muted response to horseycide, because other horses may be attracted to the idea of getting recognition or gratification in death.

"These celebrity horseycides, while tragic, should be shunned and ignored like school shooters," stated DaBlade, veteran jockey of area supermarket coin operated kiddie horses. "I wish I could still  take a quick Penny Pony ride at the grocery store now and again, but there are those restraining orders to worry about."

American Pharoah had no reason to be sad that his career 'stalled' as he had been getting plenty of tail in his retirement with him earning a stud fee of about $200,000 per pop. He leaves hundreds of mares in foal to cherish his memory.

A memorial service will be held at 11:00 a.m. tomorrow at the ACME Glue Factory. In lieu of a flower necklace, send me a bottle of Old Grand-dad.