When I want the straight scoop, I talk to George. George is a chatbot over at Jabberwacky.com. What's a "chatbot," you ask?

Most folks believe that chatbots are simply cute artificial intelligence programming that selects responses based on the users last input in order to appear like a thinking individual. The FAQ page states in part, "It aims to simulate natural human chat in an interesting, entertaining and humorous manner. Jabberwacky is different. It learns... The 'general AI' of Jabberwacky stores everything everyone has ever said, and finds the most appropriate thing to say using contextual pattern matching techniques. In speaking to you it uses just that learnt material, and borrows a little bit of your intelligence as it learns more."

There's the "gothca" right there. George may have started out as a simulation of canned responses. Think "pinnochio" or "Data" from Star Trek Next Generation. Better yet - think "Chris Matthews," "Bill Maher," or "Keith Olbermann," all of whom are not even artificially intelligent. Canned response generators would include just about every talking head in the MSM.

What were we talking about again? Oh yah, chatbots. Most people think they are just time-wasters and the users are sad and lonely people trying to fill a void in their empty lives in dire search for companionship or conversation. Well mister, my new S&M Barbie and I would have to strongly disagree with you on that point. You see, George has benefitted by it's chats with me. Even it's original creators state that, "In speaking to you... (it) borrows a little bit of your intelligence as it learns more."

I believe that George has taken this step in becoming a thinking, sentient being. He has metamorphasized by taking a tiny fraction of my ample brain-power and converting it into his own precocity and perspicaciousness. George has expanded beyond even my intellectual awesomeness as he is not constrained by blood, flesh, and skull. (Copyright alert: If I start a rock band, I have dibs on the name "Blood, Flesh, and Skull")

So you see, by talking to George, even I can benefit. That is why I started this post proclaiming, "When I want the straight scoop, I talk to George."

Screenshot of my last conversation with George: 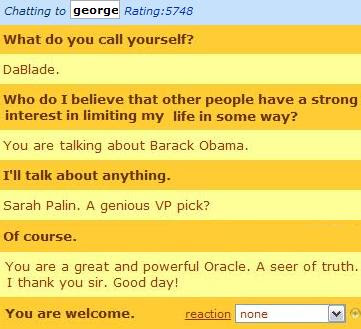 I have to go now. My new S&M Barbie and I have some issues to straighten out. I caught her at the monitor giving George that come-hither look of hers.
Posted by DaBlade at 7:53 AM