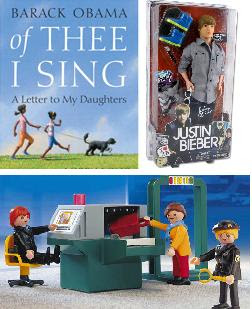 The publisher describes Obama's latest book as "a moving tribute to thirteen groundbreaking Americans and the ideals that have shaped our nation -- from the artistry of Georgia O'Keeffe, to the courage of Jackie Robinson, to the patriotism of George Washington."

Proceeds from the book, which has a suggested retail price of $17.99, will be donated to a scholarship fund for children of fallen and disabled soldiers.

It 's unknown at this point if Obama actually authored this cerebral tome, or if it was written by his favorite ghost-writer, Bill Ayers. Frankly, I'm not sure who the target market is with this. The left-wing nutjobs that are his base will be put off by the fact that their money will go towards war-monger's children, and Tea Party folks probably will not want to buy a children's book they feel it necessary to proof-read first.

Obama's book is also not expected to do well with his whacko lib base when pitted against the competition of this impressive line of children's gifts from Chattering Teeth Toys.

Abortion Operation
Egocentric Sally has decided it's not real convenient for her to carry this tissue mass to term. Pass the forceps, we're going in!

Name an abortion after your significant other
and get your very own commemorative snow globe filled with abortion debris from the International Abortion Registry...
Posted by DaBlade at 8:12 AM