If you like your bikini, you will be able to keep your bikini. Period. 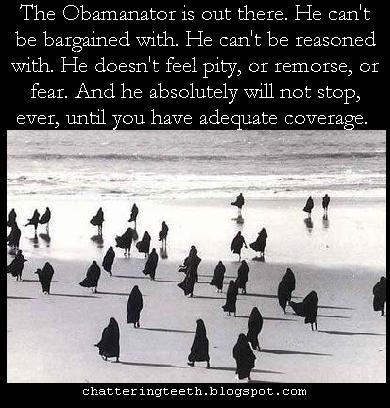 Present day debate:
At a recent presser, White House Press Secretary Jay Carney is asked (by Ed Henry for Fox News of course) whether or not the White House concedes there are winners and losers under the Obamacare mandates...

ED: A 56-year-old woman in Florida says she was paying $50 per month for health insurance, now its going to be $500 per month, and she said, quote, "What I have right now is what I'm happy with. I just want to know why I can't keep what I have." What's your response?

JAY: (A Chattering Teeth between-the-lines paraphrase) I don't know that particular woman's circumstance, but rest assured the IRS has been ordered to look into it. If her social media and voting record is deemed worthy, she will get a subsidy from the boss. However, if she doesn't keep her trap shut, I can't promise she will get that subsidy. Now let me evade your tough queeries and try to spin my way out by blathering on with the administartion's talking points.

While its true that a few million folks will be receiving cancellation letters for their health insurance under Obamacare, it is for their own good!

“I understand that there are existing plans that are so bare bones, they don’t provide adequate coverage.”

What gives these 67% of folks the idea they should have the freedom to choose their own health care coverage? We are simply making them pay ten times more for coverage they don't want but we decide they need.

Some time in the near future, during Obama's third or fourth term, after MICHELLE LAW has been imposed. Martial Law sounded so harsh, after all, and contained no elements of Shariah.

A 26-year-old woman in Florida is surprised to learn she will be forced into unwanted additional mandated coverage... 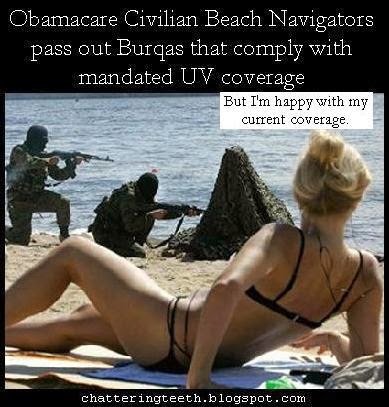 Carney conceded that some people will be required to switch from beach wear that doesn't meet minimum standards under Obamacare.

The Obamanator is out there. He can't be bargained with. He can't be reasoned with. He doesn't feel pity, or remorse, or fear. And he absolutely will not stop, ever, until you have adequate coverage.

guess who got an exemption? 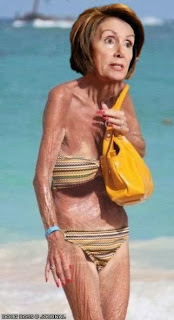 NOOOOOO! MY EYES!!!! IT BUUUUUURNS!