The Obama-mandated uni-sex "girly" hats have been roundly rejected by the Marines. 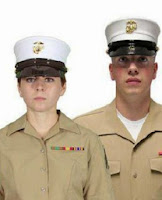 From the Malls to Saks Fifth Avenue
To the Stores of Gucci;
We will fight our country's battles
But first let's go boutique;
Exfoliate and foundation;
Wen to keep us tangle-free;
Mascara, blush and manicured cuticles;
We're United States Marines

I know it would have made Gomer Pyle happy. Maybe Obama (The Boogie-woogie Bugle Boy from out Chicago way) will have an easier time transgending the Army?

He was a Community Organizer from out Chicago way
He had a boogie style that no one else could play
He was the top man at his craft
But then the vote numbers came up and he was gone with the daft
He's in the White House now, a-blowin' our economy
He's the boogie woogie bugle boy of Company B

Loved me the Andrews sisters, but a battalion of like-dressed Boy Georges? 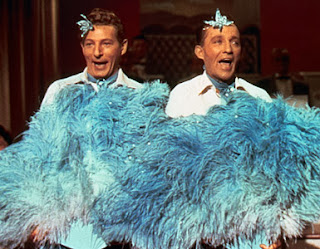 All kinds of weather
We stick together
The same in the rain or sun
Two different faces
But in tight places
We think and we act as one... uh-huh

Could be that Corporal Maxwell Q. Klinger was just ahead of his time. Then again, I don't see Obama the Bugle Boy having any more success feminizing the Army either.

That leaves the Navy  "A Global Force for Fashion?" and the Air Force “Aim High... Brow-Pluck-Thin”?????

I don't think so. There is too much honor, integrity and history in all four branches for the likes of the Bugle Boy to make any headway in reshaping into his own image.

Now, his Civilian Transgender National Security Force is a whole other story.
Drop your socks and... set your clocks. The Bugle Boy ain't done yet.
Posted by DaBlade at 8:15 AM